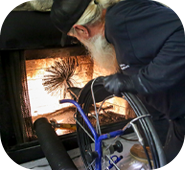 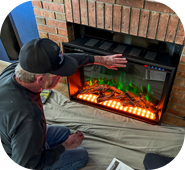 Chimney Brick Spalling: What to Know

The term “spalling,” when applied to chimney masonry, means the flaking and chipping away of a brick’s surface. As with most issues facing today’s chimneys, spalling is progressive. The longer it’s ignored, the more widespread and serious the problems can be.

Ye Olde Brit Chimney Sweep of San Bernardino, CA, would like to tell you a little about brick spalling, including why it happens, what it does and how to address it. Why do bricks spall?

Spalling can be caused by obvious events, such as violent wind storms and lightning strikes. A more common cause is water from rain and melting snow.

Water has a deteriorating effect on masonry. It can seriously affect the surfaces of chimney bricks, and it can also move into small cracks within the masonry and cause significant crumbling and breakdown. Keep in mind also that chimneys built with inferior bricks are more likely to have spalling issues down the line.

The dangers of widespread spalling and masonry damage

If neglected, brick spalling and decay can cause a number of very serious problems, including:
• Further water damage not only to the masonry but also the chimney liner, roof, attic, fireplace damper, firebox and more.
• A chimney that leans to one side.
• A partially or completely collapsed chimney.

Professional chimney technicians have workable methods to address spalling bricks. The first step to resolving this problem is an inspection.

A licensed chimney inspector will look at the masonry surfaces of your chimney and investigate collateral damage the spalling may have caused. Once the location and extent of the problem are understood, repair work can begin.
Here are some of the ways spalling can be addressed:

The reason you should schedule annual chimney inspections

Having your chimney inspected once a year will alert you to early signs of damage and malfunction, so you can schedule the necessary repair work. Unless we’re talking about immediate damage from a bolt of lightning or gale-force winds, brick spalling is usually a gradual process. An inspection can catch the problem before it gets out of hand. Along with inspections, it’s a smart idea to arrange for yearly chimney cleaning to keep your flue open and reduce the chance of a chimney fire. We care about your chimney

Ye Olde Brit has served the greater San Bernardino region in California for more than 30 years. We’ve seen just about every kind of chimney issue imaginable, and we know how to solve every one of them.

We provide complete chimney repair services, chimney inspections and chimney sweeping. We also install all types of fireplaces, heating stoves and fireplace inserts in compliance with the numerous California safety and building codes.
Speak with a chimney professional today at (909) 880-2120 or get in touch with our handy contact form.