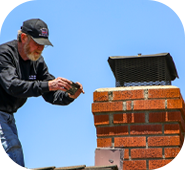 Why Is My Chimney Smelly?

If you’re noticing offensive odors coming out of your fireplace, the problem is likely inside your chimney. Some smelly chimney issues are not serious and can be solved fairly easily by a chimney technician. When running your heating or air conditioning you may notice the chimney smell gets worse.

Other odor problems point to a potentially serious situation that needs to be addressed by a professional sooner rather than later. Ye Olde Brit Chimney Sweep of San Bernardino, CA, would like to share some information on smelly chimneys and how to know when swift action is required. Fortunately, there are only a few reasons a chimney will produce unpleasant odors. Let’s look at four of the reasons.

Creosote is a byproduct of smoke combustion. It builds up in the flue every time you use your wood-burning fireplace. When a chimney contains excess creosote and the normal soot produced by fires, bad smells can start. The smells become worse when the buildup is mixed with the internal moisture that is often produced when the fireplace is used. If there’s a chimney leak (see below), the odors can become even worse. The solution here is to have your chimney professionally swept (cleaned) on an annual basis to remove built-up creosote and soot.

If water is getting into your chimney system through a leak, it’s going to begin to produce strong, musty odors. But far worse than the odors is the potential structural damage a chimney leak can cause. Chimneys can leak because of damage to their masonry or various components, such as the chimney cap, chimney crown and chimney flashing. Often, damp odors are the first clue that a chimney is leaking. This sign should be followed up with a chimney inspection and any needed repairs.

If your chimney has no chimney cap, or if the cap you have is severely damaged, your flue is open to debris from nearby trees. Leaves and twigs are primary concerns. Over time, this tree debris can make your chimney smell like a compost pile. Add in moisture from combustion and a leak somewhere in the system, and the odors can become overwhelming. A proper chimney cleaning will help with odors by removing the offending material. Repair of the existing chimney cap or the installation of a new one will put a stop to tree debris falling into your chimney in the first place. Birds, squirrels, raccoons and other small animals often build nests in chimneys. In some cases, the animals die in the chimney, unable to escape. These materials can cause strong odors to develop inside your flue and move into your home. The solution is to have your chimney cleaned and make sure you have a secure chimney cap in place.

Smelly chimneys are no fun. Ye Olde Brit knows all the right solutions to stop the smells and fix the problems that are causing them. Get in touch with a Southern California Inland Empire Communities chimney expert today at (909) 880-2120 or reach out through our handy contact form.